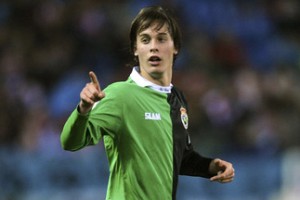 The attacking midfielder, who turns 19 next week, has burst onto the scene in recent weeks with a string of impressive performances and some eye-catching goals.

Spanish media reported the deal was worth about 5 million euros and that the youngster was set to play next season on loan with Racing.

Canales has been capped by Spain at U19 level.