It has been reported that Cristiano Ronaldo is determined to return to Manchester United according to reports. 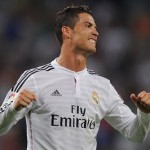 Sky Sports’ Spanish football expert Guillem Balague suggests that the Portuguese superstar is keen to leave Real Madrid and would love to head back to Old Trafford where he truly rose to prominence prior to his 2009 transfer.

It is believed that Ronaldo has been unhappy with recent transfers made by Madrid and could be seeking an exit in the not-too-distant future.

“He is unhappy and he’s said so – but then he corrected himself by saying ‘I didn’t mean what he said’. It was a bit confusing,” Balague told Revista de La Liga.

“Anyway, you have to say he’s not happy that (Mesut) Ozil left and he didn’t like the fact that Xabi Alonso and (Angel) Di Maria left.

“He has this idea, I think, that at Real Madrid he is doing a job and he is working, but he enjoyed himself almost like a kid at Manchester United.

“When will that be? It depends, of course, on a lot of things. It depends on Real Madrid and on Cristiano himself.

“I have a pretty good idea of when he wants to go. It won’t be this month or next month, but he wants to go back to Manchester United and everything is in place for him to return to Old Trafford.”