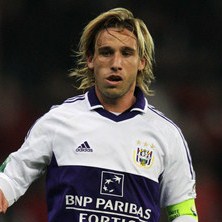 AS reported that the Spanish giant see Biglia, who is good friends with Manchester City striker Sergio Aguero, as a direct replacement for Lassana Diarra.

Biglia is tied to Anderlecht until 2015, but won’t be prevented from moving on should Real make a concrete bid.

Arsenal and Manchester United have also been linked with the ball-winning midfielder.