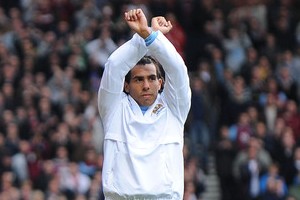 Sensational news are out and it has been reported that Real Madrid are planning a bid to prise Carlos Tevez away from money-bags Manchester City.

It is said that Real Madrid will target Tevez – once Jose Mourinho becomes their new boss.

The Special One wants the Manchester City hitman at the Bernabeu. Tevez is unhappy with Roberto Mancini’s training schedule at Eastlands.

And he was devastated that City failed to make the Champions League. Inter Milan coach Mourinho admires Tevez’s energy and commitment which made him a favourite at both Manchester clubs. But the only problem is that Madrid will have to pay £45m, which they might be reluctant to go to.