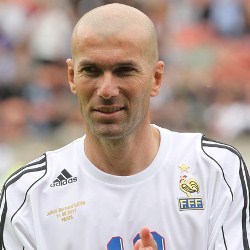 Zinedine Zidane is set to be appointed as the new sports director at Real Madrid.

The 39 year old former Real Madrid midfielder has been working at the club as a special adviser to president Florentino Perez.

However the ex-France international is now set for a more hands-on role.

Zidane told reporters in Spain : “I will be director of football for the first team,”.

“Mourinho influenced this decision, but also Florentino. We will see (what tasks I am assigned), but I will (be occupying the new role) from Monday until the end of the season.”

“He has a tremendous future, and it’s a good thing to arrive at Real Madrid so young. Varane liked the coach, so that is why he is here,” added Zidane.

Another to come in could be Brazil forward Neymar and Zidane claims the player reminds him of another Santos star who ended up at the Bernabeu – Robinho.

“He is similar to Robinho, but he scores more goals. Neymar is a player who could be interesting for Real Madrid,” he said.

“It’s normal that everyone wants Neymar, but we have to see what the club decides. We have to take things step by step.”