Reports are out claiming that Bayern Munich striker Robert Lewandowski is the player Real Madrid plan to replace Cristiano Ronaldo with. 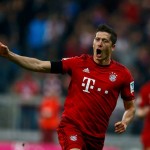 While his agent, Jorge Mendes, insists Ronaldo will stay in Madrid beyond 2016, El Cofidencial says there’s an acceptance inside Real that he is playing out his last season with the club.

Real president Florentino Perez has identified Lewandowski as his priority target to succeed the Portuguese.

The Poland international would arrive as Real’s first-choice No9, with Karim Benzema also set to be sold in the summer.

Rafa Benitez is also a big fan of Lewy and should he remain in charge next season will happily build his attack around the Bayern striker.

Premier League giants Arsenal and Manchester United are also said to be interested in the former Borussia Dortmund striker.