Reports are out claiming that Real Madrid are considering a summer move for former player Alvaro Morata. 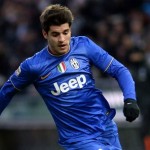 The Spanish giants sold the 22-year old striker to Juventus in the summer for £20million but have a buy-back option of around £25m which they are reportedly pondering.

The Express suggests that reports emanating in Spain have linked the European champions with a potential return for Morata’s services at the end of the current season.

Morata was a target for Arsenal last summer, as well as Manchester United and Liverpool, but eventually made his way to Turin in July 2014 and has since scored seven goals in 25 appearances in all competitions including the third goal in Saturday’s 3-1 win over AC Milan.