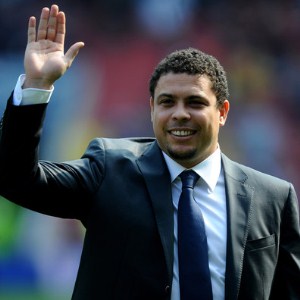 Reports are out claiming that Real Madrid is set to honour former striker Ronaldo tonight ahead of the game against Sporting Gijon.

The 34-year-old Brazilian legend, who announced his retirement on February 14, will be presented with a replica of the Machinbarrena and Aranguren statue, which was created in 1925 and now sits in front of the first-team dressing room.

He said in AS: “When I was here 10 days ago, (club president) Florentino (Perez) talked to me and told me that he intended to have a tribute for me.

“It is a great honour because I am a Madridista.”

My Goal Is To Win Titles With Real Madrid – Luka Modric

Chelsea Locked In Talks With Real Madrid For Gonzalo Higuain