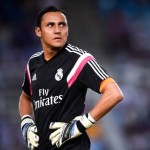 It has been revealed that Real Madrid are willing to include Keylor Navas in their offer for Manchester United goalkeeper David de Gea.

United are resigned to losing De Gea to Real this summer, but are insisting on a fee in the region of €30 million.

The Sunday Express reported that Real hope to drive down the cash demands by including Costa Rican keeper Navas in their bid.

Navas is in first season with Real, but has had limited first team chances.

De Gea is now entering the final year of his current deal. Southampton In Talks With Real Madrid For Odegaard, Asensio