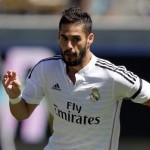 The 22 year old Spanish international midfielder has struggled to make an impact this season and has been linked with a move to the Premier League with Arsenal and Liverpool interested.

However Ancelotti insists: “We have to evaluate what he did last year. He did very well during his first year with the club.

“He was outstanding in both the finals we played in and has progressed very well. I have not lost any confidence in him. We know he is still very young and that he represents the future of the team, but there is a lot of competition within the squad. We have faith in him because he is a very important player.” Daniel Sturridge Ruled Out Of England’s Euro2016 Qualifier Against Switzerland