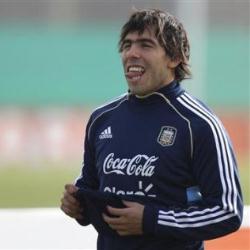 Sensational news are out and it has been revealed that Real Madrid are planning a £50 million bid for Manchester City captain Carlos Tevez.

The Sunday Mirror has reported that the Argentina striker went public with his desire to quit Manchester City early last week despite taking Roberto Mancini’s men into the Champions League and lifting the FA Cup.

The former Manchester United star insists a desire to be nearer his children in Buenos Aires is behind his decision although Blues insiders are sceptical about his motives.

Their determination to hold on to Tevez this summer will come under scrutiny when Real’s whopping offer is faxed through. Arsene Wenger Fears Ramsey Will Never Be The Same Again