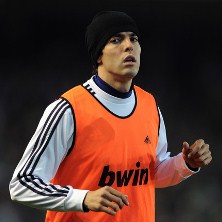 Reports are out claiming that Real Madrid are considering selling Kaka in January to fund Cristiano Ronaldo’s new contract.

According to Marca, Florentino is ready to improve Ronaldo’s contract and fund the deal by cashing in on Kaka.

Kaka’s father, Bosco Leite, has already informed Real his son is now ready to pursue his career elsewhere after previously digging in his heels when given the option to leave.