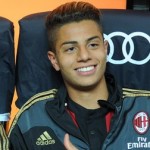 Spanish radio program Deportes COPE suggests that the Spanish giants will look to follow up their signing of Norwegian young gun Martin Odegaard by going after 16-year old Moroccan-Italian Mastour.

The attacking midfielder, who has been dubbed the ‘next Cristiano Ronaldo’, joined the Rossoneri from Reggiana for £400,000 in 2012 as a 14-year old which shows how highly he is rated in Italy.

Mastour, who has played multiple times for the Italy U16 team at international level, is also being tracked by Manchester United.