Reports have emerged claiming that Real Madrid must break the bank to land AS Monaco star James Rodriguez. 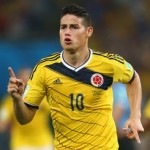 Le Parisien revealed that Monaco are demanding €85 million for the Colombia international.

The midfielder is closer than ever to joining the European champions and that ‘Los Blancos’ could seek to lower the price by including a player in part exchange.