It has been reported that Real Madrid are swooping for another goalkeeper. 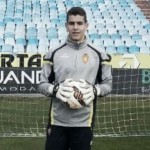 The Spanish giants are in talks with Real Zaragoza for youngster Dario Ramos.

According to El Periodico de Aragon, the Spain U16 international is set to join the Real Madrid academy.

The Ramos move is part of Real Madrid’s negotiations with Zaragoza for Jesus Vallejo.