Interesting transfer news are out claiming that Real Madrid have €50 million to spend in January on a new striker. 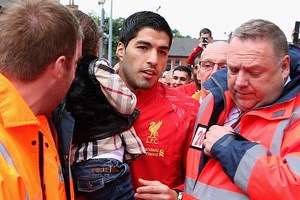 Marca revealed that Liverpool striker Luis Suarez is high on their shopping list.

The Uruguay international striker will not be Cup-tied from the Champions League, so making his signing even more attractive to Real.