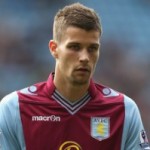 The 22 year old Denmark international striker signed for Villa earlier this summer from Aalborg and impressed in preseason.

TMW claims that Helenius is being watched by Real Madrid scouts, with intermediaries believing he could become available after Christian Benteke chose to pen a new Villa deal.

The 6ft 5in striker had been considered as a replacement for Benteke when he was wavering over his commitment to Villa.