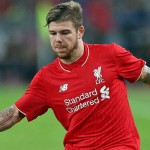 Reports are out claiming that Real Madrid declined the option to sign Alberto Moreno on deadline day.

Reports in Spain have emerged regarding the Liverpool full-back who was offered to the Spanish giants earlier this week.

AS has claimed that 23-year-old Moreno, who has fallen behind Joe Gomez at Anfield, was offered to Real who contemplated taking him on Monday.

However, Rafa Benitez eventually opted against bringing in the former Sevilla man who would have acted as a straight replacement for Fabio Coentrao who joined AS Monaco.