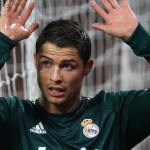 Cristiano Ronaldo is set to feature for Los Merengues after shaking off the thigh injury that kept him out of the weekend’s clash with Atletico Madrid. The forward trained on Monday and should be fit to play. However Alvaro Arbeloa (back) and Marcelo (thigh) missed the session and have already been ruled out of contention.

For Dortmund, Lukasz Piszczek is doubtful with a groin strain. The Pole missed the German side’s Bundesliga match against Fortuna Dusseldorf and faces a race against time to prove his fitness. Ilkay Gundogan (neck) and Mario Goetze (muscular problem) also missed that 2-1 win, but should be fit enough to return in Madrid.

Jose Mourinho: “It is difficult to say what mathematical chance we have [of progressing]. I’ve already said everything to my players. The most important thing was to talk about the mistakes we made in Dortmund. At most clubs success belongs to everyone and failure to the coach. Sometimes football is not fair to one team, but it was in Dortmund and Borussia deserved to win. Anything is possible though.”

Juergen Klopp: “The team needs to be disciplined and compact while also looking to be daring. We’ve had this idea of how to play for a long time, it is not mine, it belongs to the team. Nobody could have imagined we’d be here only a few years ago though we haven’t achieved anything yet. Anything can happen in football. We must concentrate on what happens out on the pitch tomorrow. I fully believe my team will play correctly and we will be hard to beat.”