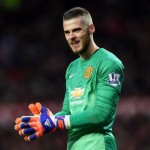 Reports are out claiming that Real Madrid want David de Gea to run down his contract at Manchester United.

AS claims that Real are willing to play the waiting game, if it means getting the 24-year-old on the cheap.

The shot-stopper will be out of contract at Manchester United in 2016, so should he fail to agree a new deal, he could be available for nothing.

And it’s De Gea’s dream to return to his home city of Madrid, after leaving the Spanish capital four years ago.