It has been reported that Real Madrid hope to talk down Manchester United’s valuation of Javier Hernandez. 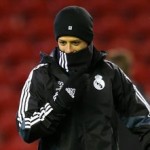 The Mexican international striker is on a season-long loan with Real and already done enough to convince coach Carlo Ancelotti to recommend his permanent signing.

United included a purchase option in the original agreement set at €17 million.

However, Real feel a price of €15 million would be more realistic for Chicharito.

The striker has scored three goals in six appearances for Real so far this term.