Reports are out claiming that Manchester United have been told they can sign Real Madrid star Gareth Bale – if they include David de Gea in their offer. 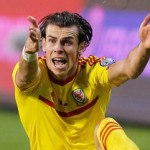 The Manchester Evening News says United chiefs have been alerted to Bale’s potential availability next summer.

However Madrid have told United they want goalkeeper De Gea to be included in any deal that takes Bale to Old Trafford.

Bale, 25, tasted Champions League glory during his debut campaign at the Bernabeu.

But sources in Spain have claimed that he has struggled to settle into manager Carlo Ancelotti’s new look side this season following the arrivals of Toni Kroos and James Rodriguez.

And Bale’s inability to adapt to Ancelotti’s new system could see him depart Madrid with Chelsea and Manchester City also keeping tabs.

Madrid are keen on United stopper De Gea and have made him their No.1 target in their bid to find a long-term successor to Iker Casillas.

And it is understood the Spanish giants have intimated they would be willing to do business with United for Bale, if they include De Gea in any deal.