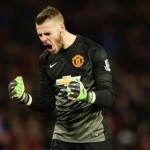 Reports are out claiming that Real Madrid have gone cold on signing Manchester United goalkeeper David de Gea this summer.

It is said that the Spanish giants want to focus their resources on prising Paul Pogba away from Juventus.

The People says Real still want to add the United keeper to their squad, but may put off their bid for another 12 months as they use all their cash to strike a deal with Juventus.

De Gea would then have to decide whether to sign a new contract with the Old Trafford giants worth £200,000 a week or allow his current deal to expire so that he can become a free agent in 2016.