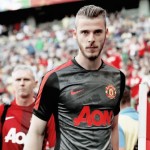 With Kiko Casilla and Keylor Navas on the books, both veterans feel it would be overkill.

Miguel Angel told AS: “Personally I don’t think it’s a good idea to bring in that amount of goalkeepers at once.

“Navas needs to build up playing time; he has all of the qualities needed to do the job. As for Casilla we’ll have to wait and see how he handles the pressure.”

Jaro also stated: “Is it so necessary compared to what the team might need in other areas?

“I’ve got a lot of affection for Casilla. I don’t know much about De Gea, but I think the goalkeeper’s position is well covered.”