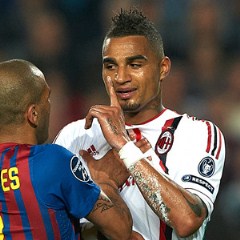 Since his arrival from Tottenham, the Ghana international midfielder has been a revelation for the Rossoneri and played a key role in their Scudetto triumph last season.

TMW reported that the Spanish giants are scouting Boateng this season as they consider selling former Milan star Kaka.

Sao Paulo ace Lucas is their No1 target, but Boateng has emerged as an alternative should the Brazilians prove tough negotiators.