Reports are out claiming that Real Madrid are willing to cash in on star midfielder Isco. 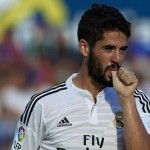 The Daily Express says Spanish sources report Real could be forced to sell one or two high-profile players as they prepare big-money moves for Bayern Munich’s David Alaba and Cruzeiro’s Lucas Silva.

The same outlets also believe that French champions PSG are in the market for Isco, and are ready to bid a whopping £64m for his services.

Arsenal and Liverpool are also being linked with the Spain international.

Real coach Carlo Ancelotti is apparently willing to sanction the move in exchange for the enormous fee, meaning that both Arsene Wenger and Brendan Rodgers will also be able to offer Isco a contract should they decide to match PSG’s bid.