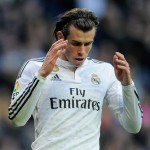 The Wales international has been accused of being ‘selfish’ this season, particularly after one incident against Espanyol.

“As I say, people have their own opinions and that’s how they make their living. It’s their work, they get paid to do it. I think that when I’m playing I set goals up, and I score them too. I play football my way. That’s what I like.

“All I can remember is that I was going through on goal and I wanted to score… and if I had scored nobody would have talked about it again. But I didn’t see him and it would have been a difficult pass. But it’s part of football and that’s that.”