Reports have emerged claiming that Real Madrid star Cristiano Ronaldo will learn Wednesday the length of his ban for dismissal against Cordoba. 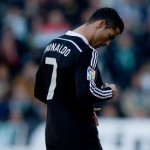 The former Manchester United star is waiting to find out how many games he could miss after being sent off for the first time this season for kicking Cordoba’s Edimar Fraga.

The Spanish football’s disciplinary committee meet on Wednesday, which is when a decision is expected.

Ronaldo also slapped Jose Crespo during the win at Cordoba, but that went unnoticed by referee Alejandro Jose Hernandez.