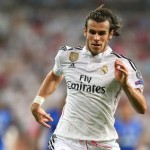 It has been reported that Wales coach Chris Coleman expects Gareth Bale to stay with Real Madrid.

The Wales winger has been linked with Manchester United and Chelsea in recent weeks.