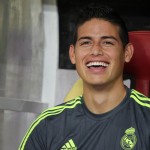 It has been revealed that Real Madrid midfielder James Rodriguez is set to make his comeback against Sevilla.

The Colombian international failed to get a run-out against PSG, but all indications are that he will make his comeback against Sevilla after being sidelined for almost two months through injury.

“I’ve been fit for two weeks and I’m ready to give it everything,” he said a GQ function.

Regarding the controversy over whether he will be called up for Colombia again after barely having featured for Real Madrid since he was injured on international duty back in September, he said that he understands the critics, but called for people to understand his position.

“I’m happy playing both over there and over here, and people have to understand that it’s something I have to do and not something I can avoid.”