Reports are out claiming that Real Madrid striker Karim Benzema is keen to hear more from Arsenal boss Arsene Wenger. 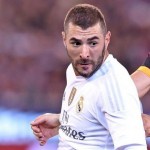 El Confidencial claims that Wenger has already made contact to sound out Benzema over a move to the Emirates.

And Benzema did not say ‘no’ to the proposition.

Wenger has been linked with a £40million move for Benzema, although Manchester United are also thought to harbour an interest in the player.

Rafa Benitez is still working on his tactics in pre-season, with Gareth Bale potentially moving to a striker role.