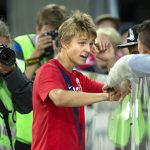 Reports are out claiming that Real Madrid midfielder Martin Odegaard is eager to join Liverpool.

The Sun says Odegaard is waiting on Liverpool boss Jurgen Klopp – after stalling on a loan move to Germany.

The Norway attacking midfielder, 17, is poised to discuss his future with Bernabeu officials and his dad Hans-Erik is thought to prefer a Bundesliga switch.

Bayer Leverkusen and Hamburg are among the top-flight German clubs reportedly keen on skilful Odegaard.