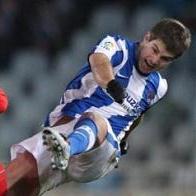 Former Real Madrid and Spain player Michel replaced Marcelino as Sevilla boss last week, but failed to make an immediate impact and the sliding Andalucians have now taken only two points from their last eight matches.

Mexico striker Vela, on loan from Arsenal, volleyed the opener in the 65th minute at Anoeta and three minutes later Pardo struck a blistering drive past Andres Palop.

Sevilla dropped down to 13th with 26 points from 22 matches, one behind Sociedad in 11th, and only three points above the relegation places.