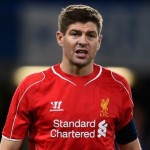 Reports are out claiming that Real Sociedad coach David Moyes has made a move for Liverpool captain Steven Gerrard.

However, he is expected to return to Europe in January, with a loan arrangement mooted for the midfielder.

Former Everton boss David Moyes is a big fan of Gerrard and Spanish sources say contact has already been made with his representatives.

Nothing concrete has been discussed, though La Real management have asked to be kept informed of Gerrard’s plans leading up to the 2016 January transfer window.