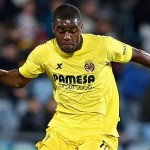 The Mail on Sunday says Moyes has launched a bid to sign Campbell.

The Real Sociedad boss tried to sign the Costa Rican last summer but he moved to Villarreal on loan as part of the £11million deal that saw their defender Gabriel Paulista go in the opposite direction.

This time Moyes is proposing a £6million bid to take the 22-year-old Campbell on a permanent deal. Ozil sold to Arsenal because of Aida Yespica