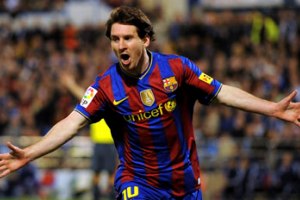 Lionel Messi continued his remarkable goalscoring form with a hat-trick as Barcelona moved level once more with Real Madrid at the Primera Liga summit with victory at Real Zaragoza.

The Argentina winger, who also scored a hat-trick in his last league match against Valencia, opened the scoring with a header after five minutes and added two more after the break to send his side 3-0 ahead.

That should have made the game safe for Barca, but Zaragoza rallied with a brace from substitute Adrian Colunga to set up a nervy ending.

Messi, however, quickly stamped out the threat as he embarked on another mazy run to earn a 90th-minute penalty which Zlatan Ibrahimovic, who until then had been profligate, slammed home for his first league goal since February 14. Barcelona To Use Suarez In Bid For Liverpool’s Philippe Coutinho