It has been reported that Red Star Belgrade midfielder Marko Grujic has shrugged off Premier League transfer rumours. 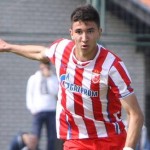 Chelsea are said to have opened talks with Red Star for the 19 year-old after Grujic was scouted twice inside a week by Manchester United.

“The rumours and speculation do not touch me. I feel beautiful here,” he said.

“I want Red Star to win the title and qualify for the Champions League.

“It is only then that we might speak with management about a something else.”