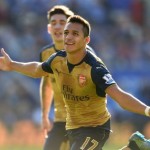 Redknapp believes the North London club will be desperate to bounce back in front of their home fans following their midweek loss to Olympiakos in the Champions League.

“They have got to come out and beat United otherwise it will have been a truly terrible week for Arsenal.

“They couldn’t have a better game. The crowd will put the disappointment behind them and be absolutely buzzing on Sunday.

“What you don’t want is a game against a team near the bottom who you are expected to beat because if it doesn’t go well, the crowd start moaning and the situation gets even worse.

“They will be bang up for it and I can see them bouncing back and beating United. As long as Arsene picks his best team.” Danny Welbeck Determined To Be More Consistent With Arsenal