It has been reported that former Liverpool midfielder Jamie Redknapp rates Adnan Januzaj ahead of Memphis Depay. 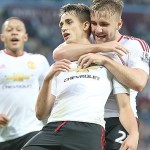 Redknapp told Sky Sports: “The good news for Manchester United now is that (Adnan) Januzaj has come back into the equation.

“He looked like a young man that could go out on loan with talk of Sunderland maybe taking him.

“I think they have signed Memphis Depay for £31million, but they already had somebody in their ranks that is more talented, he (Januzaj) is a special player.

“I remember the first time I watched him for United and I think about the goal he scored against Sunderland – he can do special things with a football.

“He wasn’t magnificent (against Aston Villa) by any stretch of the imagination but the arrogance he can afford to play with will come with confidence.

“He drifts past people and has a unique talent like that. He’s the special player in this team I think. He can turn people inside out.”