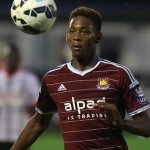 It has been reported that Reece Oxford is set to sign new terms with West Ham United.

The Mirror claims that Oxford is set to give the club a major boost by committing his long term future to Upton Park.

Liverpool, Manchester United and Arsenal have all been tracking the 16-year-old defender who is viewed as one of the country’s brightest prospects.

Oxford, who has captained England’s under-17s, has already made the bench for the first team and is now set to sign a deal after positive negotiations.