Reports are out claiming that ref Andre Marriner has apologised to Arsenal for his howler during their 6-0 defeat to Chelsea. 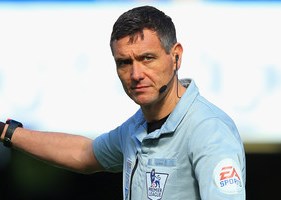 With the Gunners already trailing 2-0, Kieran Gibbs was sent off for handling an Eden Hazard shot, despite replays clearly showing it was team-mate Alex Oxlade-Chamberlain, who then approached Marriner to admit wrongdoing.

A Professional Game Match Officials Limited statement on Saturday evening revealed the apology after Marriner dismissed Gibbs for a foul committed by Alex Oxlade-Chamberlain which resulted in a penalty in the 17th minute of the match.

“Andre is an experienced referee and is obviously disappointed that an error of mistaken identity was made in this case,” the statement read.

“Incidents of mistaken identity are very rare and are often the result of a number of different technical factors.

“Whilst this was a difficult decision Andre is disappointed that he failed to identify the correct player.

“He expressed his disappointment to Arsenal when he was made aware of the issue.”