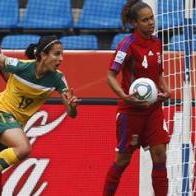 The women’s World Cup suffered a refereeing blunder when an Equatorial Guinea defender held the ball in her hands in the penalty area for several seconds, only for the referee to wave play on.

Television replays showed that a shot by Australian forward Leena Kharmis hit the post and rebounded to Equatorial Guinea defender Bruna, who apparently believed that play had been stopped.

After holding the ball for at least three seconds, she let it fall to the ground but Hungarian referee Gyoengyi Gaal waved play on amid Australian protests and general incredulity.