Reports have emerged claiming that Arsenal manager Arsene Wenger has admitted that referee Michael Oliver and his match officials made an error on Monday night. 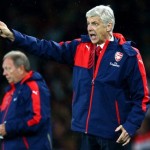 Gunners midfielder Aaron Ramsey wrongly had a goal disallowed for offside in the eventual 0-0 draw with Liverpool at the Emirates Stadium which Wenger felt was clearly an inaccurate judgment.

In the post-match press conference, the Frenchman was asked if he had spoken to Oliver to which he replied: “Yes. I didn’t ask for any explanation.

“What does it change?

“It’s about decision-making and he got it wrong. I could see live that he could not be offside. He started his run behind his man. I could see it from where I was but I thought maybe the angle on TV was different.

“It was not and I must say that Liverpool played well in the first half. We were insecure defensively and we gave them many balls. We created trouble for ourselves but even in the first half we had chances.”