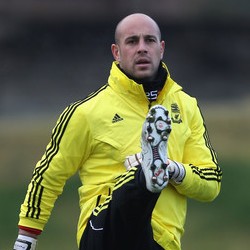 Liverpool goalkeeper Pepe Reina has declared that he willbe staying at the club.

The Spanish international goalkeeper, who signed a six-year contract only last season, revealed that he is determined to stay put.

Reina insisted: “I’m tired of rumours linking me with many teams in England and abroad.

“I am a man of my word and commitment. I will honour my contract with Liverpool.

“Stories of these offers are not true. I have not spoken to anyone – ever – and I am 100 per cent a Liverpool player.”

The former Villarreal goalkeeper is however desperate to return to winning ways at Anfield.

He added: “Since I’ve been here I’ve found an incredible passion, more than I thought from Spain.

“Liverpool as a club is sacred, it is something special.

“Being Liverpool’s goalkeeper is a privilege. For now I just want to win trophies for them.”