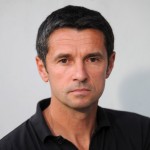 It has been reported that former Lyon coach Remi Garde is set to interview for the Newcastle United job.

The Mirror revealed that Garde is set to be the first coach interviewed for the Newcastle job.

The former Lyon boss is expected to discuss succeeding Alan Pardew in the next few days.

John Carver is in charge for Saturday’s clash with Chelsea and has been told “possibly” the game against Southampton.

By then Newcastle could have made progress in luring Garde, 48, to St James’ Park as the newly-designated ‘head coach’.

Former Arsenal midfielder Garde is thought to have a good relationship with chief scout Graham Carr, and wants to start work quickly.