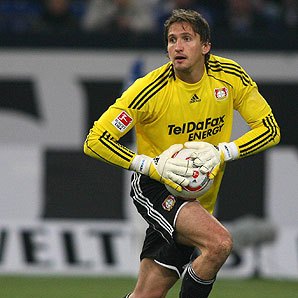 Bayer Leverkusen goalkeeper Rene Adler has once again spoke of his ambition to play for Premier League giant Manchester United and is not ready to discuss a new contract with his Bundesliga club.

The Red Devils are on the look out for a new No. 1 with Edwin van der Sar, 40, almost certain to retire from professional football at the end of the current campaign.

The 25 year old German international believes this is his chance and has effectively sent out a ‘come and get me’ plea by declaring his ambition of moving to Old Trafford.

Adler, whose current deal with Leverkusen runs until the summer of 2012, was quoted as saying in the Sunday Mirror: “I have told the board of Leverkusen that I am not willing to discuss any kind of new contract until April. I just want to achieve a Champions League spot with my team here now.

“But everyone here knows that I have higher ambitions and everyone knows that Manchester United is my dream club. The board of the club are aware of the special clause in my contract.

“As a young kid all my friends were interested in cartoons, MTV, and German television programmes, but I was only interested in one person: Peter Schmeichel, who was in goal for Manchester United. I thought he was fantastic and loved every minute he was on TV with United.

“My whole bedroom was full of Schmeichel posters and United things. I also had one or two other heroes in football, like Paul Gascoigne and Zidane. But nobody, in my eyes, was as impressive as Schmeichel.”