It has been reported that former Manchester United No2 Rene Meulensteen is not surprised to see a bid go in for Bayern Munich star Arjen Robben. 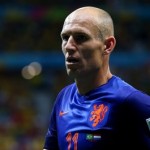 The Premier League giant are said to have had a £40million bid turned down for Robben, who has signed a three-year extension to his deal at the Bundesliga giants.

An improved offer might tempt Bayern to cash in on the player, given that he is 31 next January.

He said: “I’m sure Van Gaal would love to take Arjen Robben to United – that’s not a surprise.

“When I was at United, we looked at that possibility but then he signed for Bayern and is happy there.”