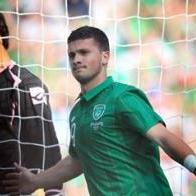 Shane Long ensured the Republic of Ireland will head off on their Euro 2012 adventure on the back of a win with the only goal against Bosnia-Herzegovina.

The West Brom striker’s 78th-minute header was enough to claim victory in the Republic’s final game on home soil before the finals.

Giovanni Trapattoni’s men might have won more comfortably in front of a crowd of 37,100 with the post, the bar and the heroics of keeper Asmir Begovic denying them.

The win extended Ireland’s unbeaten run to 13 games a day before they leave for their pre-tournament training camp in Montecatini, Italy.