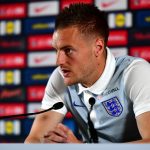 England star Vardy has turned down a £20million move to Arsenal to stay with the champions, who have handed him a new deal worth £100,000-a-week.

Wenger, in an interview with beIN Sports, said: “I think Leicester have made a statement and Vardy will stay. We were on the case and interested, but not more than that.

“He has decided to stay at Leicester and good luck to him.

“He came late to the game and in fairness Leicester bought him from Fleetwood and he has been successful. He is 29 and he has chosen to stay at Leicester. You have to respect that.”