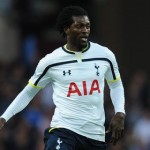 Reports are out claiming that Tottenham striker Emmanuel Adebayor rejected an incredible offer from Qatar to quit the Premier League last month.

The former Arsenal and Manchester City star was offered £245,000-a-week – more than DOUBLE his current deal – to leave for Qatar, says the Mirror.

The 30-year-old Togo international said: ”The transfer window was open for a month and we all knew what was happening. It didn’t all happen in 48 hours.

“The club decided to send me out on loan, which I was pleased with. There were five good clubs interested and I [narrowed it down to] three before choosing the one I wanted. But Mr Levy was against the one I chose, because it was a rival.

“But I’m very happy to stay at the club and do my job.”